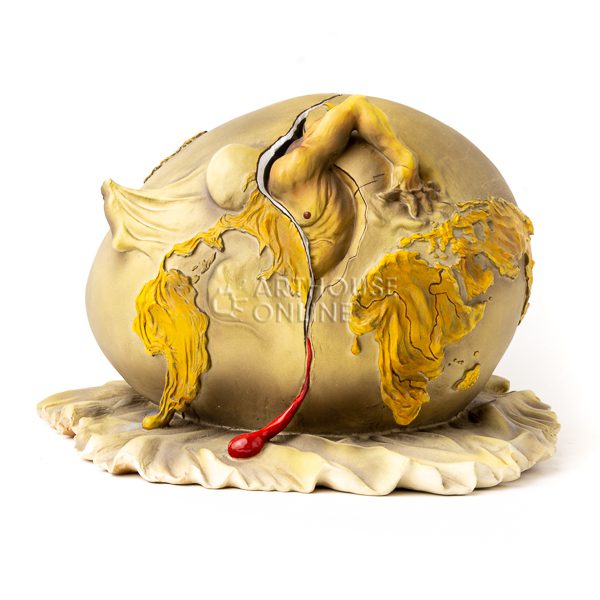 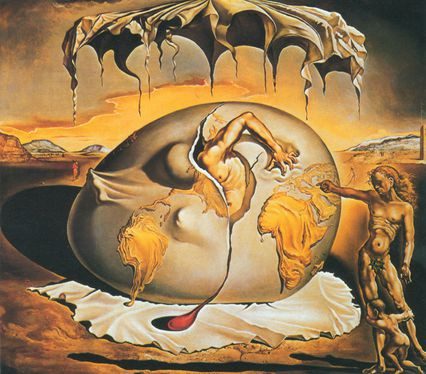 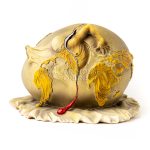 The new human must free itself from its oppressive entwinement with the past. Height 12 cm.

The greatest amongst the surrealists sublimated his life in his art of painting and strived to capture his subconscious in images. “The new human must free itself from its oppressive entwinement with the past”.

Geopolitical child watches the birth of a new human (1943)

Whilst the world is on fire Dalí paints the birth of the new human. Frightened, seeking the protection of its mother, the child sees a man struggling to escape a plastic egg of which the continents drip down. Here stands the new symbol of a new order, a new beginning for a new and perfect world. The painting is a plea for a radical liberation from the oppressive entwinement from the past. In the opening sentences of his manifest which was published some years before Dalí says, “When during the history of its culture a people feel the need to cut the ties with which it is bound to the logical systems of the past in order to obtain an independent mythology – a mythology which perfectly fits its essence and its total expression of their biological reality and is recognised by the higher elite- then public opinion demands from the pragmatic society, considering its own systematic, that the motives for such a split is enlightened with traditional and worn out formulas”.